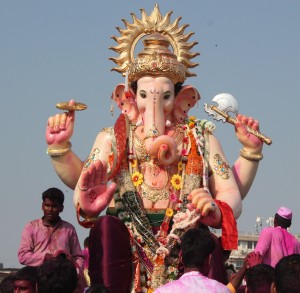 India is a confusing country no doubt. With the magnitude of diversity the country demonstrates in terms of religion, language, geography and spirituality, it is unfathomable to be able to understand the nation and its people in one go. The seeker is bound to go astray in such an attempt. However, there are common symbols of the Indian kaleidoscope that bind the country into one cultural unit. One such symbol is the Indian festival.

What is common to the Indian festivals of Ganesh Chaturthi , Navratri and Durga Pooja? What is symbolic of Holi and Diwali festivals?  Well, they all involve two aspects, without which no Indian festivity is complete – Noise and color! Noise can take the form of music, sloganeering, chants or religious discourses and hymns at decibel levels unfamiliar to contemporary mankind. Color can be seen in the attires, colourful idols and decorations. To the clueless eyes and ears of an alien, all this may seem like an out of the world experience.

There are two aspects that one needs to consider to decode this ‘chaos’.

Firstly, Indians by nature are an affective race. Much to the amusement of another, an archetypical Indian doesn’t hesitate to make feelings, emotions, financial status, and social standing obvious. You will encounter the archetypical Indian sharing happiness at the birth of a child, disapproval of government schemes or even political preferences and affiliations. It is important to note that the British during their rule created evident divisions in India leading to long term consequences on society, especially communities and geographies.  The affective nature of Indians can be partly attributed to the attempts to redeem the past that later seems to have passed on to future generations as a way of life. The post independence politics and policies have also created rifts within the Indian society such that every section wants to be seen and heard. There was a time when festivities in India were quieter affairs compared to the drum beatings and trumpeting in the present day celebrations. The youth in localised communities got together under the supervision of community elders and organized festivals that were open to all, irrespective of caste, creed or religion. Over the past two decades, these festivities have taken grossly political forms with groups sponsored by political parties that spend exorbitant amount of monies on celebrations. It is not too difficult to guess the motivation of all this being political supremacy over contemporaries. Larger the celebration, greater is the political mileage. This has led to sweeping changes in the way these festivals are celebrated in contemporary India. Indian festivals have hitherto never seen such flamboyance – be it the colors or the noise. The affective orientation continues to exist. It’s just that the manifestation has now changed from display of spiritual camaraderie and group solidarity to political competition.

A crowd in a festive mood in Mumbai

The other aspect of being an Indian lies in the communitarian orientation of the citizens.  This aspect is quite evident in Indian mythology and history. Those who know Indian mythology will understand the collective atmosphere Gods thrived in. Gods had a unique form and individual purpose. Yet, they were a unit against evil forces in spite of individual uniqueness. In the epic Ramayana, the war against Ravana was fought with various forces getting together letting go of their individual priorities for a common purpose and supported Lord Rama in his endeavour. When Rama went to the forest on exile, he was accompanied by his wife Seeta and brother Laxman, even though they did not have an obligation to do so. Historically, cricket has been a great example of Indians coming together irrespective of their backgrounds and community. The game of cricket is as much a part of Indian culture and is a big symbol of harmony and group solidarity. People prefer to watch cricket matches in pubs, restaurants and other public places in a group setting, even though each one of them owns a television set at home. The mutual bonding is traditionally very obvious in rural India, where you will experience that most people know each other by name and the celebration in a single household ends up being a village festivity. Coalition politics is a contemporary example of how people with diverse agendas come together for a common purpose. Collective celebration continues to be a preference. Times are fast changing though.

So, the next time you visit India during the festive season or you are trapped in the middle of festive activities on the streets, remember that Indians are an expressive communitarian lot. They will not mind if you join in their celebrations and play with color and chant with them than be an amused onlooker. As they say, it happens only in India!! Join or be left out!